1976, Tau was born in John Hopkins.
1992, the first non-invasive try, Harvard.
1992, the first formula, with four assumptions, Harvard.
1993, another non-invasive try with decent data, Mayo Clinic.
1995, a similar strategy applied to AI patients, Japan.
1995, I published a MR based formula with one assumption.
1997, the Harvard formula was validated in Cleveland.
2005, Langer presented a non-zero asymptote model.
2008, I improved my MR based formulas, without assumption.
2008, I did a similar deduction for AI based Tau.
2008, Chen developed program for my formulas, free download.
2008, my poster in ASE 19th Annual Scientific Sessions.
2009, my poster in CSE forum.
2009, DF guideline (ASE) recommended Harvard formula.
2009, I gave my opinion about the guideline recommendation.
2009, "Response to Bai" from guideline writing group. It motivated me to create this Blog.
2010, Dr Wang and me presented general Tau.
2011-11-29, I gave a talk in National Capital Echo Round (Ottawa)
2015, an updated Tau review in Chinese.
2016-03-29, I gave a talk at the Heart Institute, the North Hospital (Shenyang, China)
2016-04-01, I gave a talk at the Cardiac Function Dept., the 1st Clinical College, Chinese University of Medicine. (Shenyang, China)
2016, ASE DF guideline, 2nd edition
2016, Symmetry inspired by the approach of Tau.
2017, Calculation of LAP (based on my formulas) got a Chinese Natural Science Founding.
2018, MR based Tau equation group was validated.
2019, the motto of Harvard is Veritas
2019-12-2, thou shalt not bear false witness against thy neighbour
2020-1-1, response to "response to Bai"
2021, AI based Tau equation group was validated.

One of our most influential Echocardiographers, Dr Luigi had his concern about Tau measurement in MR patients. Fact is quite a few cardiologists asked similar questions. Let me take this chance to address the issue.

Tau happens within isovolumic phase of diastole, which means three approaches are available to measure it. One is to insert a catheter into the LV. This is the invasive method well accepted as a gold standard to assess diastolic function during basic research. The other two need measuring either MR or AI CW Doppler spectrum. Both the formulas and their verification had been published. The MR Tau has already been in Mindray’s Echo machines since 2017. 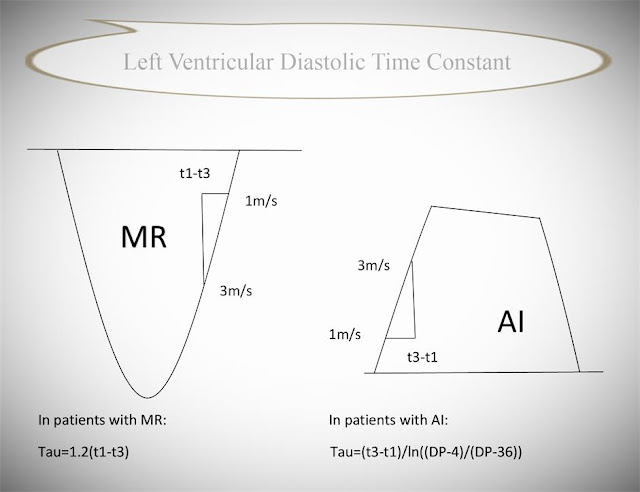 In normal studies where there is no MR or AI, we cannot measure Tau in an Echo lab. Dr JD Thomas can measure it, but his method bears logic flaws. After dominance of non-invasive Tau measurement for more than two decades, Tau is died in daily clinic.

Chances of MR or AI increase dramatically in HF pts, usually we tend to have interests to measure Tau in these pts.

Another issue is Tau is indispensible sometimes. 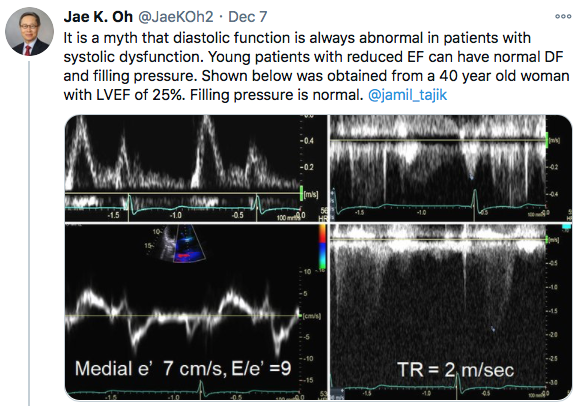 Just as our Echo giant Dr Jae K. Oh mentioned above. In some severe HF pts, the assessment of diastolic function could be confusing without Tau. To my knowledge, almost all of those pts we can measure Tau, the measurement always suggest severe diastolic dysfunction.

The last but not the least, Tau can only be measured non-invasively in pts with either MR or AI, similar like dp/dt or PISA. It is amazing for it is indispensable sometimes. The strength of Tau comes from its direct relationship to cardiac muscle power, which leads us from special Tau to general Tau, and finally reveals symmetry of cardiac function assessment. Dr Sherif Nagueh’s vision about the “symmetry” is:

It might be very helpful in the assessment of cardiac function in the future, especially for RV and diastolic function.