Cao in My Eyes and Beyond

Recently, several articles from top scientific journals are the culmination of years of cracking down academic fraud campaign. Unfortunately, Cao Xuetao became the key role. With the absolute dominant influence of the journals over research area, Cao is almost the most infamous scientist right now. The Chinese Ministry of Science and Technology was also blamed for failing to handle the whole process properly. 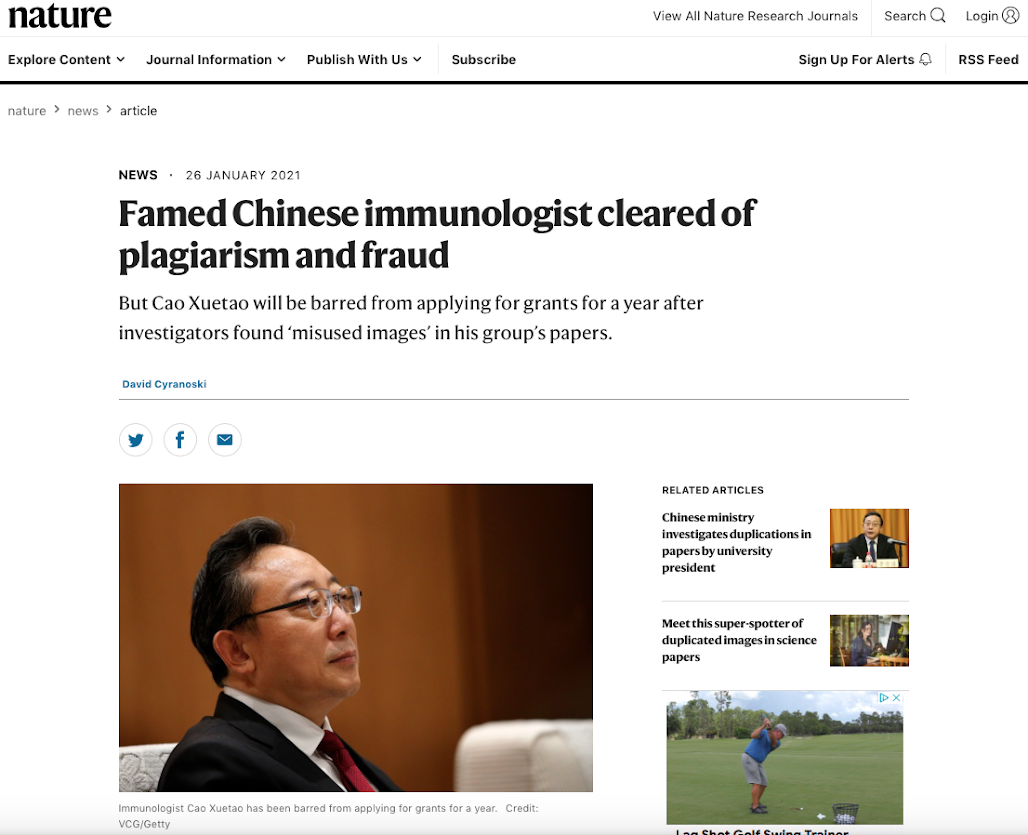 In my memory, Cao is our pride alumnus and successful immunologist-turned president of one of the most prestigious universities in China. He is one year older but three grades higher than me. A good soccer player with a pleasant personality, Cao was pretty popular during his early days at the campus. His career picked up steam soon after he became a postgraduate. More of less, folks from the Second Military Medical University (SMMU, PLA) took delight to talk about his extraordinary hard working and achievements. He was nominated director of the Immunology Dept. soon after he got PhD at neck breaking speed. One of my best friends working just under him, so I got to hang around in the department quite a few times. A note on his office door is still vivid after 30 years:

What a workaholic! If his career started in the states, he might be another Elon Musk. Long story short, he became a distinguished immunologist by any standard. A convincing testimony is he was bestowed the highest title as a researcher not only in China but also in America, British, France and Germany. Around 10 years ago, he was assigned a new mission in Beijing. Prof. Yu, also my classmate, supervised his lab left behind in Shanghai. Through a talk over the line, Yu told me: this lab is in good shape; we can publish 2 to 3 Nature papers every year. To my knowledge, a Nature paper usually is a lifelong pursuit of researchers; you guys can churn out 2 to 3 every year! If anyone thinks they did it simply by copycat pictures, it is a blunt humiliation to the whole industry.

Due to military, the entrance requirement of SMMU excludes near-sighted candidates. Take a look at Cao’s thick eyeglasses now, years of intensive reading and writing took its toll on his eyesight. Another issue worth mentioning is he never got trained abroad, meaning a long bumpy road has to be covered before shining in the English-dominated scientific research area. 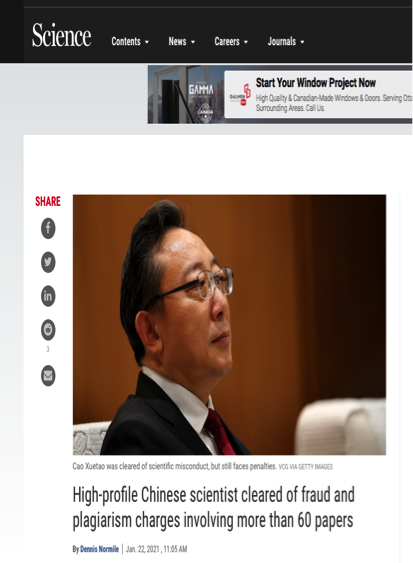 As fame accumulated, Cao supervised several labs in several cities. Big mistake! Administration job in the meantime consumed a big chunk of his energy. It turned out the quality control of some of his co-authored papers headed into wrong directions. There are always people in this world like to take a shortcut to get what they want. I’d rather believe the entire copycat pictures labelled by Bik, et al, were perpetrated by his students, or other researchers. This doesn’t mean Cao can get away completely. Authorship means responsibility as well as honour. The corresponding author, particularly, has to take the full responsibilities for any problems caused by the paper.

Most of the copycat pictures labelled by Bik et al, are far away from honest errors. Guess Cao also agree now. Bottomline is he  checked at least the conclusions of all his co-authored papers. This is why so far the academic dishonesty didn't cause significant damage to science. It is doesn't mean we can tolerate it, nevertheless, we should focus on more harmful frauds. 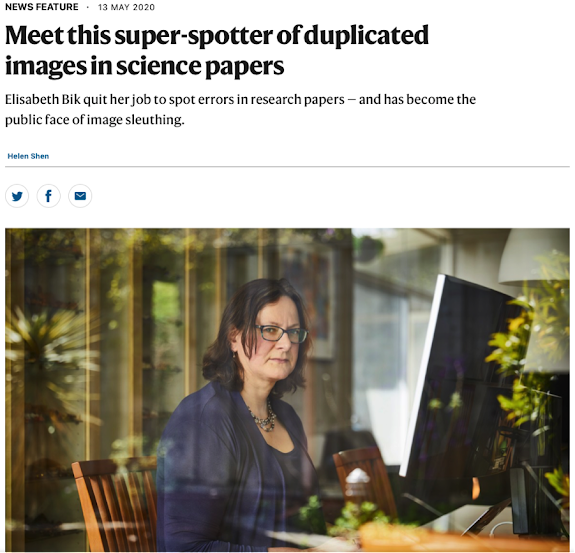 Bik developed a simple but effective strategy to proof check fraud
pictures. Usually, they published their findings on Pubpeer.com. She and her friends are kind of the immune system to the whole publishing industry. Hopefully, some organizations, governments…can support this important job by allocating some money, like the bounty hunters in the old Wild West being supported. If we do so, more fighters will hop in the bandwagon. The immune system of publishing will be strong and the industry will be healthier.

Academy fraud is a problem all over the world. The decline of research morality as a whole is more worrisome. Another hot topic is the infamous Chinese paper mills. Under the harsh pressure from the government, the dirty business has fled into underground. Fact is more ominous research misconduct is happening around us. If we are serious, we should pay more attention to cases with disturbing consequences. Like this one:

Tau, left ventricular diastolic time constant is a well-established index to describe diastolic function. However, it is died in daily clinic thanks to a celebrity “method”.

Dr James D Thomas, probably the most famous Echocardiographer in the world, invented a “method” by four bold assumptions. Though the theory has logic flaws, it can still be “verified” both experimentally and clinically. All the papers were published in top journals, the method was written in textbooks. 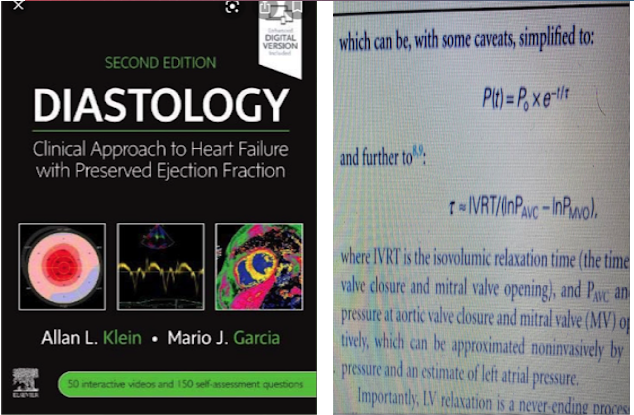 Over more than two decades, quite a few papers were published based on the formula…It is a waste of time, energy, money, animals, even human beings. Unfortunately, the Emperor’s New Clothes Parade is still on, and on…

You don’t need to be an expert to fully understand the theory. It is beyond logic and above reason. Tau is died, but the Tau method survived. What kind of method that could be?

I discovered the Tau formula by pure mathematics. The papers were rejected by almost all the main stream journals due to the above-mentioned celebrity method. It was integrated into Mindray's Echo machines in 2017.

The biggest Echo machine manufacturer is GE and Dr JDT is a consultant for the company. Can we imagine GE will make a Tau-measurable Echo machine in the near future? Even big companies like GE need right direction, correct? 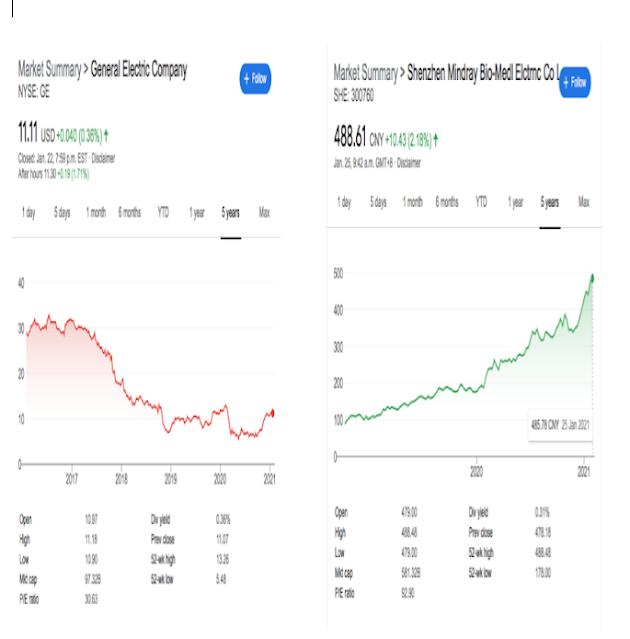 Thanks to Pubpeer.com, lots of academic dishonesty was exposed. But, whenever celebrities are involved, things got complicated:

President Biden put science at the top of his agenda. From history, only a few people are privileged to contribute original ideas. Yet most of us can help to get rid of the fake and retain the true when we are sincere and honest with our daily jobs. 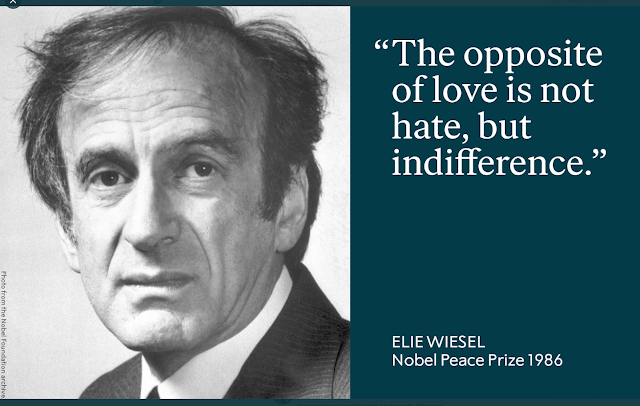 Email ThisBlogThis!Share to TwitterShare to FacebookShare to Pinterest
Location: Ottawa, ON, Canada